Posted by Enerco Energy Solutions LLP at 02:13 No comments:

Below is a screen shot of a variety of Solar output possible for the same site with different project sizes and project configurations.

Following are the observations made -
One of the 5.78 MWp project give 1609 kWh per kWp whereas other same size project gives 1661 kWh per kWp. For a 1 MWp Solar project the difference would be

Considering these projects have been used to consume power under captive mode at INR 7.0 per kWh (standard Industrial tariffs in India) the loss is 52,000 kWh per annum i.e. INR 3,64,000 per annum., which translates into a revenue loss of
Which means a total loss of INR 89,72,600 over the total useful PV Solar project life of 25 years. The actual loss is much higher as we have assumed a basic flat tariff of INR 7.0 per kWh for 25 years, whereas in reality the power tariff is expected to rise inline with inflation + economic growth.

Adding up the additional revenue due to good design the total comes to INR 5.65 Crores over the total useful life of the project i.e. 25 years. Considering the prices in 2019-20 additional savings is nearly 20% of the total project cost.

It is better to put in best efforts during the planning phase as majority of the installed Solar Projects (nearly 70%) in India are facing performance issues. This means the generated output is lesser than the projected or designed output. Many of these projects have a PR (Performance Ratio) of less than 75%.

(Read - Why is planning stage important in Solar as nearly 70% of Solar Projects are not performing well.)

In a nutshell, a badly designed Solar project can impact -
It is therefore mandatory to use the best-in-class technology inline with the site conditions and location coupled with better design which results in best performance. A well-designed Solar Project goes a long way in ensuring optimum output over it's useful life.

To receive a detailed presentation with calculations, just drop us a mail on solar@econserve.in
Posted by Enerco Energy Solutions LLP at 03:34 No comments:

Solar Project Financing - CAPEX vs OPEX / RESCO - which is better for you?

Posted by Enerco Energy Solutions LLP at 09:38 No comments:

Solar Energy - Can it boost your Company's Profits? 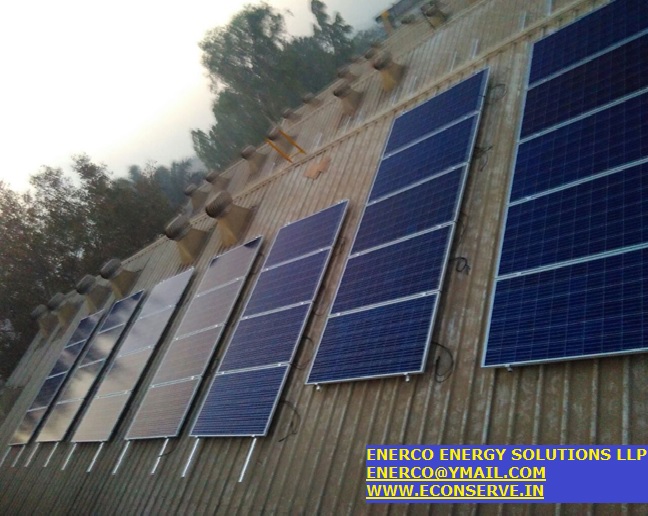 Solar Energy installations in India have grown in the recent years with widespread acceptance due to fall in cost of project installation. The erstwhile target of 20 GW by 2022 set by the previous Government is already achieved in 2018 and we are now poised to achieve 100 GW (new target set by the incumbent Government) of Solar Power installation by 2022.

So far the installed Solar projects have been of utility scale with very few Captive Solar Projects. Another interesting point is out of 100 GW set Solar Energy target, 40 GW is for rooftop (or ground mounted) captive Solar Power Projects.  It is now estimated that a big number of Solar projects in 2018-19 would come up on Captive basis due to the following reasons :

While you would willingly agree on the other points., the point 1. above needs further detailing and explanation. Here is how Solar Energy can boost a Company's profits -

A. Direct savings by Solar BOOT / OPEX model
(Recommended for immediate gains as a Company starts saving from first day of commercial operations of Solar Project)

These savings can directly and positively impact the Company's bottom line as the savings translate into reduced cost of production.

B. Revenue addition by hedging against power cost rise + asset creation (CAPEX)
(Recommended for medium to long-term gains as Company starts saving once the project has paid back -> typically in 3 to 5 years and then FREE Power for remaining 20+ years) 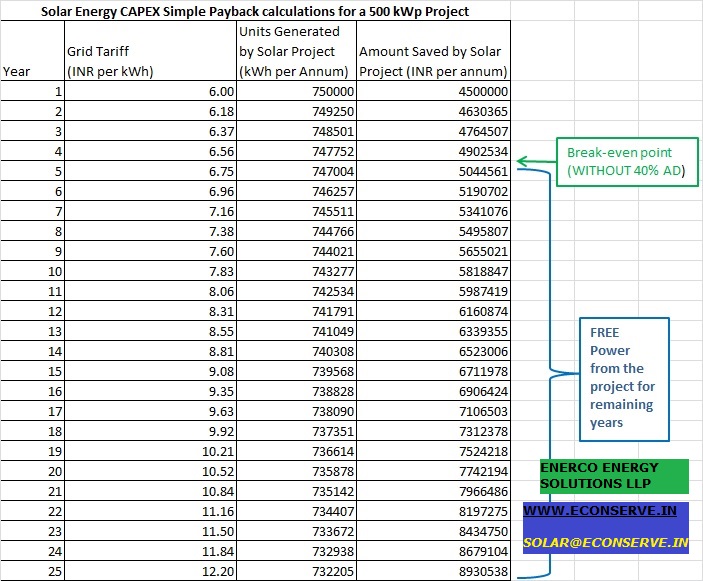 We have only considered CAPEX (self-funded) and OPEX (100% 3rd party funded) financing models as they are the most popular ones in India. Additionally there are a variety of other financing options possible too. A customized financing option can work out in favor of all the stakeholders involved thereby providing maximum benefits to your Company.

If you have any comments / feedback / queries then please comment below. Alternatively you could also send a mail to ENERCO@YMAIL.COM    OR    SOLAR@ECONSERVE.IN  if you have any specific query pertaining to your requirements or in general.

Posted by Enerco Energy Solutions LLP at 05:50 No comments: