What is Solar Energy (focus on Solar Photo Voltaic or Solar PV)?

Solar Photo Voltaic is using one of the most useful and the most sustainable forms of (Solar) Energy to generate electrical power especially for a Solar-rich Country like India. In simple terms Solar Energy refers to using the 2 main forms of the Energy of The Sun i.e. Thermal Energy and Light Energy and converting the same for more usable forms mainly generating electrical power. Although both forms have been in use for quite sometime now - Solar Photo Voltaic which uses Light energy of The Sun is gaining immense popularity due to various advantages it offers.

Solar Photo Voltaic mainly refers to using the light energy of The Sun to convert it to electrical power or electricity so that it can be used to run everyday applications at residential or industrial level or export power to the grid. To do the this special type of Cells known Photo Voltaic Cells are used. These cells are manufactured using complex process to convert Raw Silica into PV Cells or Modules. The value chain is as follows :

When Photons from a bright source of light such as The Sun strikes the PV Modules (containing PV Cells), they displace the electrons present in the PV Cells. Due to this the electrons begin flowing in one direction thereby producing electrical power as depicted in the image below. 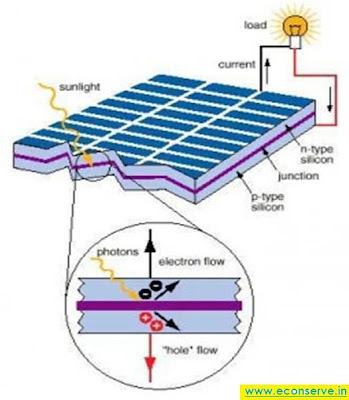 It is thus no surprise that Solar PV offers numerous advantages not only over various conventional energy technologies but also over various green-tech (including Solar Thermal). In fact there are specific advantages of using Solar PV over Wind energy as well. We have prepared a Comparison of Solar PV Power Generation vs Wind Energy Power Generation., please send us a mail on solar@econserve.in to receive the same.
Posted by Enerco Energy Solutions LLP at 12:00