Is Solar Energy the answer to India's Power Problems?

Fossil Fuel Thermal Power Plants account for more than 70% power generation in India. Primarily Coal-based Thermal Power Plants (TPPs) dominate the Power Scenario with nearly 55% of overall power generation share. With the recent hike in Coal prices or in general fossil fuels - including Petrol - there is no other time better than now to look at Alternative options. There are mainly 2 issues with Coal - Availability and Cost.

Coal availability is forcing Indian Power Cos. to look at imported coal and overseas mine acquisitions. Even this looks far from solving the issue as seen in case of Tata's Mundra power project where the Indonesian Govt. increased taxes on Coal export. Despite demands from the Power Company to renegotiate Power Purchase Agreement terms the State Government is reluctant to give in. Central Government is trying to do its bit by reducing duty on imported coal but then International coal prices are on an upswing. The recent attempt by the Central Government to arm twist Coal India to sign Fuel Supply Agreements (FSAs) with Power Companies has indeed boosted the spirits of the Power Companies - but at what cost? Even if the FSAs are signed it would ensure availability. But the high cost of imported Coal would be transferred to power Companies and in turn to the consumers who are already reeling under the pressure of inflation, blackouts and brownouts.

[What other people are reading and liking - Does Energy Audit really Save Energy?]

Logically an abundance of a resource justifies its dominant utilization in any Country or a region. For instance India was indeed a Coal-rich Country - once upon a time. However due to rapid development of new Thermal Power Plants for increasing demand coupled with rapid growth of Industries relying on Coal - the reserves have gone down significantly with nearly 100 years reserve a few years back the present figure is much lesser (recent estimates of less than 60 years). The rapid downward momentum is expected to continue. Not to forget the other challenges in the Indian Power Sector especially on Infrastructure - Logistics for Coal Supply, Transmission & Distribution, ATC Losses (nearly 33% and one of the worst in the world), Power Thefts, Power Wastage / Losses etc.

So what should be the next logical step for solving the power problem of the Country facing a peak power deficit of 10-12%? We do not have to look far for an answer as it is quite obvious. Solar Energy (Solar Photo Voltaic) - one which has significant benefits over not only fossil fuel plants but also over other renewable technologies. Traditionally being used for heating water - Solar Energy is now seriously being looked at as a source for Power Generation. Solar Energy is a generic term which refers to the Light Energy and Heat Energy of the Sun. Last decade has witnessed significant developments in Solar Water Heating - at household level as well as Community and Industrial level.

Power generation could either be through Solar Thermal or Solar Photo Voltaic. A Solar Thermal Power Plant uses concentrated Thermal energy of the Sun to generate super-heated steam to run turbines for generating power. Although green - Solar Thermal Power has its own challenges and drawbacks - mainly water required for operations and thermal storage. Solar Photo Voltaic Power Plant uses Light energy of the Sun to directly generate power - without any steam generation. It works on the Photo Voltaic Principle i.e. when photons (from Sun light) strike the Photo Voltaic Panel (solid state semiconductor device) these photons let loose the electrons within the PV panel to generate electrical power. 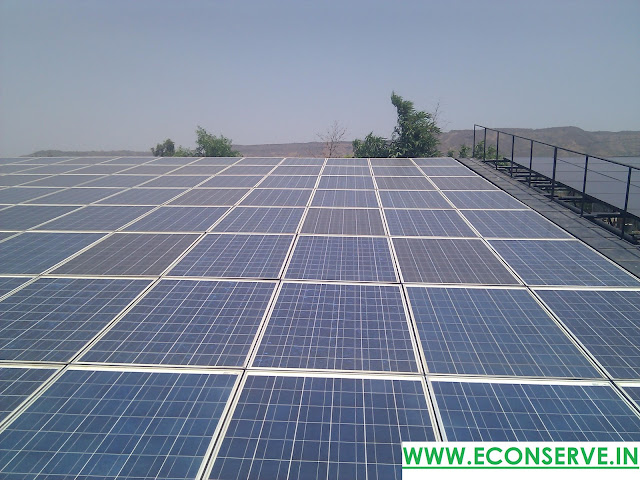 As is evident Solar Photo Voltaic offers notable advantages and inherent qualities of simplicity which is not possible in any other technologies. Important ones are :

This does not mean that Solar Photo Voltaic would completely replace fossil fuel plants - atleast not in the foreseeable future. But using Solar Photo Voltaic at various levels can reduce dependence on Coal to a substantial extent to complement grid power. This would not only ensure coal availability in the short to medium term but also preserve coal reserves.

Technology advancements price reductions and opening up of new markets has thrown open a huge opportunity especially for Solar-rich Countries like India. With more than 90% of locations across the Country highly feasible for using Solar Power - either through centralized or decentralized systems - Solar Photo Voltaic is poised to be the solution of choice in the Indian Power Scenario for a long time to come and can answer most of the power related problems.
Posted by Enerco Energy Solutions LLP at 10:04 5 comments: