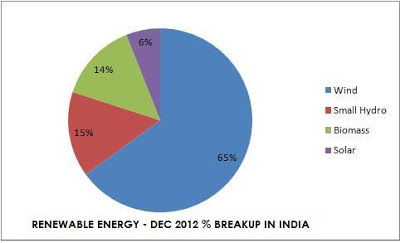 Solar Energy usage for power generation started in 2011 - nearly 20 years after the use of Wind Energy. Moreover Wind Energy was supported with several incentives and benefits including tax breaks. It is therefore natural for Wind Energy to lead the pack of RE in India. In fact Solar power is also supported by various incentives and subsidies - in fact more than wind. But interestingly quick penetration / adaption of Solar power, technology improvements and high demand has resulted in significant reduction in cost of power generation from PV Solar. One of our other posts stresses on the fact that PV Solar power project can also become financially viable even in the absence of subsidies and incentives.

While it has taken Wind Energy around 20 years to reach about 18 GW it has taken Solar Energy less than 2 years to reach a cumulative figure exceeding 1 GW. There are reasons for strong growth of Solar Energy in India and there is no doubt that further growth will be exponential. In fact capacity-wise PV Solar Power generation will  far exceed that of Wind Energy in the years to come because :
Once the above benefits and facts are commonly known among the masses PV Solar will gain popularity and  hence result in rampant use of PV Solar at all levels. In this post we have given detailed comparison between Wind and Solar. However it is a known fact that PV Solar scores over other Renewable Energy Technologies as well as can be seen here - How and Why PV Solar scores over other Renew Techs?